New CD: Something About Her 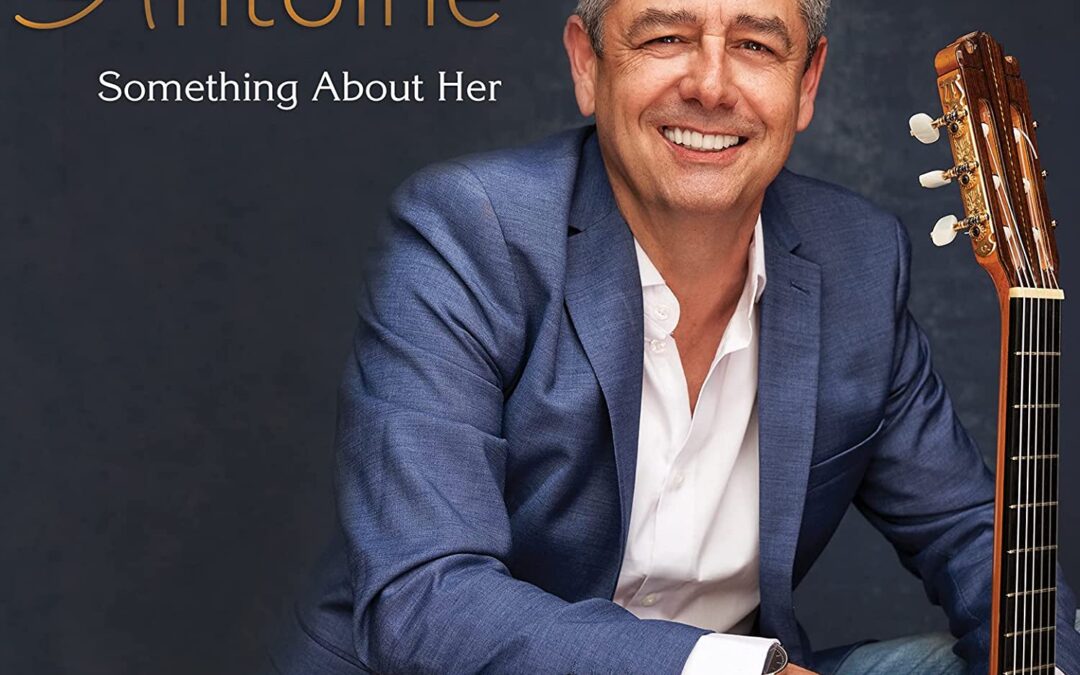 “It’s all about the voyage for me. I hope I can take listeners along with me to enjoy the voyage,” exclaims Marc Antoine. The Parisian born guitar extraordinaire’s spark for music began as a child. He recalls, “My parents told me that when I was four, I went into a trance while listening to Igor Stravinsky’s ‘The Rite of Spring.’”

The same deep emotion that Antoine felt towards music as a child, has manifested itself in his remarkable ability to translate his powerful connection with music to his listeners. May 21, 2021 Marc Antoine will release his second recording for Shanachie Entertainment, Something About Her, dedicated to his wife Rebeca. “After 25 years, we are still in love,” reflects Antoine. The new recording is a life-affirming celebration that sizzles with dazzling melodies, dancing rhythms and exotic harmonies.

Antoine is joined by many of his all-star friends including keyboardists David Benoit, Brian Simpson, Philippe Saisse and saxophonists Marion Meadows and Greg Vail, among others. “We are all good friends and everybody is magical in their own way,” shares Antoine, who is based in Laguna Niguel, a little town south of Laguna Beach in Southern California. “I prefer going to a studio and recording live with everyone but in this case, the collaborations were done in everyone’s own recording spaces. Technology these days is amazing and I think we still managed to make it sound like a live record. We defeated Covid in a way.” Danny Weiss, Shanachie Entertainment VP of Jazz A&R states, “Marc Antoine’s mastery and depth of expression of both jazz and classical guitar result in an absolutely exquisite style that is both beautiful and profound.”

“I’m a firm believer of things happening for a reason and I think this past year has given a lot of people time for reflection. One thing I know for sure is the world needs some help,” states Marc Antoine. Those who acknowledge the transformative and healing power of music will rejoice in the release of Marc Antoine’s Something About Her. The ten track musical journey is an invigorating collection of songs that showcase Antoine’s impeccable musicianship and vast range of influences. “I like and listen to all kinds of music,” confides the guitarist. “For me it’s like cooking, you can’t cook the same meal everyday, otherwise it would be boring and unhealthy.”

Antoine summons all of the right ingredients on Something About Her and the results are thoroughly satisfying. The album’s tantalizing and exhilarating opener “Still In Love,” features Antoine’s enchanting, melodious and crisp guitar lines, which are accentuated by the percussion of Luis Conté and the horns and flute of Greg Vail and Tony Guerrero. The swinging, breezy Bossa and title track, “Still In Love” is as cool as it gets. The interplay between Antoine and Brian Simpson is pure bliss. “Brian and I have played many gigs together and when I wrote the song, I heard his touch right away.” Bassist Roberto Vally and drummer Joel Rosenblatt round out the ironclad quartet and help to create a high point on the CD. The ebullient “Marco Polo” is a memorable and ear-catching ditty penned by pianist Philippe Saisse, who is also featured on the track. “Saisse and I are long time life brothers,” confesses Antoine. “He’s never far when I record a new project.” The album’s first single “Groovy Sunday,” has all the right ingredients for a perfect day. Antoine’s original features Philippe Saisse, saxophonist Marion Meadows and drummer Gorden Campbell.

Something About Her shifts gears with Marc Antoine’s exquisite waltz “Velvet Night” highlighting Philippe Saisse on vibes, while “Corto Maltese,” composed by Philippe Saisse, transports us on an unforgettable adventure and pays homage to the comic book sailor created by Hugo Pratt. “When Philippe sent me the tune with this title I loved it right away,” says Antoine. “I used to read Corto Maltese adventures when I was a kid. It was pretty out there back then. Philippe loves all those characters and he also has that Italian connection since his mother was born there.” Marc Antoine’s fascinating tapestry of sound on “Eclectic World” conjures up a beautiful world for all. “I think the world would be boring if it was not eclectic,” shares Antoine.

“America is very eclectic with all kinds of people from all around the world. I dream of a world where everybody can get along in harmony!” The R&B inflected “California Haze” shines a different light on Antoine as his guitar lines sail through a laid back groove enhanced the soulful tenor saxophone of Greg Vail. “I have known Greg for a long time. We are now neighbors and our wives are always hanging together so I see him all of the time. He’s way underrated so I wanted to give him a push. “Summer in Technicolor” conjures images of fluttering butterflies, melting popsicles and lazy sun-drenched days. The masterful pianist David Benoit, who helps to create a high point on the album, equally matches Antoine’s joyous vibe. “David and I made the recording So Nice together and we have toured extensively with this project. We’re now very good friends so it was logical for me to have him on this project.” Something About Her closes with the meditative “Song For Sasha,” written for Antoine’s granddaughter. He shares, “She lives on a French island called La Reunion in the middle of the Indian Ocean. I have yet to see her because of the pandemic.”

Revered for his soulful elixir of exotic textures and fluid artistry, guitarist Marc Antoine has been a force of nature on the contemporary jazz scene for over three decades. Classically trained at the International School of Classical Guitar, Antoine was first widely introduced to audiences in the late 80s when he hit the road with Basia. Loved for his unique fusion of classical, jazz, soul and world influences, Marc Antoine quickly became a mainstay on radio and the international touring circuit working with everyone from Sting and Cher to Marion Meadows, Rick Braun, Dave Koz and countless others. Through the years, Antoine has also been first call for the popular Guitars & Saxes All-Star tours and cruises.

Some of the standouts in his illustrious recording catalogue features Gypsy (1995), Madrid (1998), Universal Language (2000), Cruisin’ (2001), Mediterraneano (2003) and Modern Times (2005), Foreign Exchange with Paul Brown (2008), My Classical Way (2010) and Guitar Destiny (2012). In 2012, Antoine faced health challenges and had to undergo major heart surgery. In 2014, after several misdiagnoses, he had surgery to relieve cramping in his hand caused by a previous accident as a teenager. Antoine’s severe nerve damage caused one of his fingers on his left hand to get stuck in an odd position, causing unbearable pain when he would play the guitar. Overcoming these challenges, Marc Antoine is back in top form. The consummate artist recently relocated back to Southern California after living in his wife’s hometown of Madrid for over a decade. Antoine released Laguna Beach in 2016 and his collaboration with David Benoit, So Nice, followed in 2017.

Marc Antoine credits his fans and the search for his own musical truth as the sources for his continued inspiration. “I started playing the guitar when I was about 11 and a year later, I couldn’t let go nor imagine doing anything else. I’m so thankful I have been able to do so much more than I ever hoped for. I have the best fans all around the world. After all these years, they are still here listening to and buying my music. I am grateful. I never tried to copy anything and I always follow my heart.”